Paul Krugman Is Wrong Yet Again about Obamacare: News: The Independent Institute

What I’m about to show you is in my opinion an embarrassment to the economics profession and I wish more of my colleagues would express their strong disapproval.

Take a look at the blue line in the chart below. It shows the annual rate of change in U.S. health care spending. Now here is what Paul Krugman wrote in his New York Times column the other day:

... the facts are striking. Since 2010, when the [the Affordable Care Act] was passed, real health spending per capita—that is, total spending adjusted for overall inflation and population growth—has risen less than a third as rapidly as its long-term average. Real spending per Medicare recipient hasn’t risen at all; real spending per Medicaid beneficiary has actually fallen slightly.

He then goes on to consider a number of possible causes for this slowdown, but appears to give the lion’s share of the credit to Obamacare. In fact his column is titled, “Obamacare’s Secret Success.”

All of which is pointless speculation, because as the chart clearly shows, nothing happened to the rate of increase in health care spending in 2010—the year Obamacare was passed.

When Peter Passell was the economics editorial writer for the Times, the kind of intellectual dishonestly reflected in Krugman’s column never would have graced the pages of the newspaper. Sadly, standards have deteriorated. And there is more. 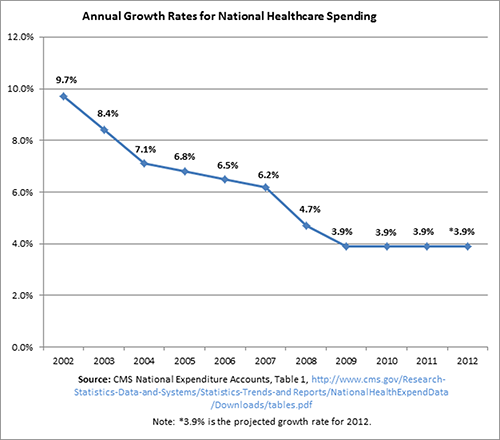 Taken from Joe Antos, Testimony before the Senate Committee on the Budget.

Here is something else Krugman failed to inform readers about: as the chart clearly shows, the slowdown in the rate of health care inflation has been steady and stretches over almost the entire decade before the Affordable Care Act became law. Whatever the cause, it started early on George Bush’s watch—not under Barrack Obama.

Moreover, ObamaCare doesn’t really begin until this coming January. All the changes up to now have been cost increasing—providing risk pool insurance to the uninsurable, forcing private plans to cover more benefits, and adding such extras to Medicare as free “wellness exams.”

So how does Krugman manage to give Obamacare any credit for a slowdown in spending? He begins by noting that a 2011 letter signed by hundreds of health and labor economists pointed out that “the Affordable Care Act contains essentially every cost-containment provision policy analysts have considered effective in reducing the rate of medical spending.”

Sad to say, but there are members of my profession who will occasionally sign their names to nonsense. Even so, shouldn’t readers be told that the letter and the Congressional testimony of the letter’s organizer, Harvard professor David Cutler, have been completely discredited by University of Chicago professor Casey Mulligan and other reputable economists—scholars who actually looked at the facts instead of signing on to shoot-from-the-hip rhetoric.

And shouldn’t readers be informed that every reputable forecast made by serious economists has concluded that Obamacare will add to health care spending, rather than detract from it? For example, the Medicare actuaries predict that Obamacare will add $625 billion to total health care spending over the next decade. And the RAND Corporation predicts that consumers in the ObamaCare exchanges will pay almost $2,000 more for health insurance than they otherwise would by 2016.

Krugman has other arrows in his quiver. For example, he claims Obamacare:

Further, Krugman must surely know that the federal government has been funding dozens of pilot programs and demonstration projects to see if different methods of payment under Medicare will reduce costs and improve quality. Yet three separate Congressional Budget Office reports have found that these experiments are not working. (See here, here and here.)

There is one final bit of deception. Krugman writes that:

... there’s evidence that Medicare savings “spill over” to the rest of the health care system—that when Medicare manages to slow cost growth, private insurance gets cheaper, too.

Well not quite. The study found that this is true not for Medicare, but for private (Medicare Advantage) plans that Krugman generally rails against for being less efficient than government insurance and that receive fees that Obamacare is scheduled to cut.

RELATED
Texas Conservatives Should Not Support Banning Land Sales to Foreigners
‘Belief in Freedom’ Is Bad for You
How Japan Kept Inflation Rates Low
Sins Against Children: On America’s moral compass in the face of Covid.
When Putin Turned His Back on Reaganomics
Wanted: A Successful Collegiate Rent-Seeker
New California Law Will Cripple Its $20 Billion Fast-Food Industry
Conflicting Health Policy Visions in the Senate
How the Boom Bust Works
The COVID/Crypto Connection: The Grim Saga of FTX and Sam Bankman-Fried
Fine. Blame Ticketmaster for the Taylor Swift Fiasco, but Don’t Overlook the Fundamental Cause.
Can’t Get Taylor Swift Tickets? Blame Other Fans, Not Ticketmaster