Why Prices Matter Part I: News: The Independent Institute

The single biggest mistake in all of health policy is the belief that the best way to make health care accessible is to make it free at the point of delivery. This mistake underlies our entire approach to providing health care to low-income families in this country; it is the basis for the organization of the entire health system in most other developed countries; and it is deeply embedded in the Obama administration’s approach to health reform.

In a new book, Priceless: Curing the Healthcare Crisis, I explain why this belief is wrong:

Interestingly, a natural experiment forms a test of my critique: the recent recession. As explained in a report from the Center for Studying Health System Change, middle class families are responding to bad economic times by cutting back on their consumption of health care. They are postponing elective surgery, forgoing care of marginal value, and making more cost-conscious choices when they do get care. This reduction in demand is freeing up resources, which are apparently being redirected to meet the needs of people who face price and non-price barriers to care. From 2007 to 2010:

And this is in the middle of one of our worst recessions!

During the recession the money price barrier to care actually rose among the uninsured, although the increase was not statistically significant. The number of uninsured people reporting access problems because they were “worried about cost” rose from 91.5 percent to 95.3 percent. (Translation: virtually everybody who is uninsured worries about cost.) Yet over the same period, the number of people experiencing access problems because of waiting and other non-price barriers was almost cut in half (falling from 40.3 percent to 24.1 percent).

Here is something even more interesting. Suppose that in an attempt to increase access to care, we add one more doctor, one more nurse or one more clinic. Who is likely to benefit? The study implies that the higher your income, the greater the likelihood you will gain. During the recession, for example, the percent of people experiencing an unmet need with income at 400 percent of the poverty level ($43,000 for an individual or $89,000 for a family of four) or above was more than cut in half. Yet, among those with income below 200 percent of poverty ($22,000 and $45,000, respectively), the percent of those with unmet needs actually rose.

Think (metaphorically) of a waiting line for care. The lowest-income families are at the end of that line. The longer the line, the longer they will have to wait. If you do something to shorten the line, you will be mainly benefitting higher-income people who are at the front.

Why is that? I believe that many of the skills that allow people to do well in the market are the same skills that allow them to do well in non-market settings. High-income, highly educated people, for example, will find a way to get to the head of the waiting line, whether the thing being rationed is quality education, health care or any other good or service. Low-income, poorly educated individuals will generally be at the rear of those lines.

Another study suggests that even low-income patients are more deterred by non-price barriers than by price.

Although most states try to limit Medicaid expenses by restricting patients to a one-month supply of drugs, North Carolina for a period of time allowed patients to have a three-month supply. Then the state reduced the allowable one-stop supply from 100 days of medication to 34 days and at the same time raised the copayment on some drugs from $1 to $3. Think of the first change as raising the time price of care (the number of required pharmacy visits tripled) and the second as raising the money price of care (which also tripled).

In a study of this episode (gated with abstract), researchers discovered that a tripling of the time price of care led to a much greater reduction in needed drugs obtained by chronically ill patients than a tripling of the money price, all other things remaining equal.

This study pertained to certain drugs and certain medical conditions. But suppose the findings are more general. Suppose that for most poor people and most health care, time is a bigger deterrent than money. What then?

If the study findings apply to a broad array of health services, it appears that the orthodox approach to getting health services to poor people is as wrong as it can be. It implies that everything we have been doing in health policy to make health care accessible for low-income patients for the past 60 years is misguided.

A third study found that enrolling children in the Children’s Health Insurance Program (CHIP) does not result in their receiving more medical care. But when CHIP pays higher fees to doctors, the children do get more care. Suppose the state is strapped for money and can’t afford to pay higher fees? A common sense answer is to let the parents add to the CHIP reimbursement rate and pay a higher price. There is an obstacle to common sense, however—it’s illegal for parents to do this.

Think about that for a moment. We encourage families to enroll their children in CHIP, by making the coverage free. Many apparently drop their private coverage to take advantage of the opportunity. Then, when access to doctors declines and the time doctors spend with these patients declines as well, we make sure they have no other options by making it illegal for the family to pay the market rate for their care!

When we expand a government insurance plan for low-income patients, we are spending billions of dollars in a way that doesn’t increase access to care. At the same time, we forbid the enrollees to do the one thing that would expand access to care.

Lessons from the Food Stamp Program

Contrast what we do in health care with the Food Stamp program (SNAP), which has about 60 million participants (most of whom are probably also Medicaid enrollees). Low-income shoppers can enter any supermarket in America and buy almost anything the facility has to offer by adding cash to the “voucher” the government gives them. They can buy anything you and I can buy because they pay the same price you and I pay. But we forbid them to do the same thing in the medical marketplace.

Take a look at the table below. It compares the prices charged by MinuteClinic to the rates Medicaid pays in Dallas. In general, Medicaid pays less than half. That’s why MinuteClinics usually won’t accept Medicaid. If low-income families were allowed to add from $30 to $50 of their own money to the Medicaid rate, however, in one fell swoop we could make high-quality, very accessible primary care available to millions of people. 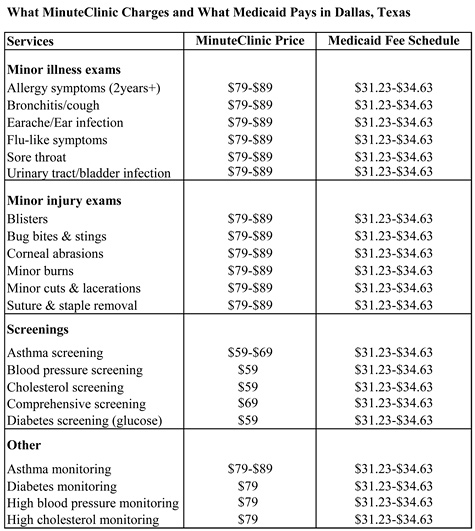 Encouraging the Emergence of Market Prices

Many important sectors of our health care system came into existence in order to cater to people paying with their own money. Telephone and email consultation services (such as Teladoc of Dallas) and mail order pharmacies (such as RX.com) are examples. Walk-in clinics, surgi-centers, free-standing emergency care clinics and other retail medical care outlets also qualify. Wherever the third party payers are not the main buyers of care, providers complete on price and often on quality as well, there is transparency and the prices patients face are usually real market prices. (See a survey here.) In all of these instances, the case for allowing Medicare, Medicaid and CHIP patients to pay the market price is strong.

But we could do more than that. In a previous Health Affairs blog post, Tom Saving and I argued for more experimentation. Let some doctors balance bill. Let the government pay some of the cost of concierge care. Let some doctors have the freedom to repackage and re-price their services—again, with patients paying out of pocket for any “extra” charges. In each of these cases, the test us this: will patients pay something out-of-pocket for prompter service, better service or different service. If the answer is “yes,” then expand the experiment and allow more doctors and facilities to compete in what might develop into a real market for medical care.

First, wherever possible, we should encourage real markets in health care—with prices determined by supply and demand rather than by third-party payment formulas.

Second, where real market prices exist, we should allow patients in public insurance programs (Medicare, Medicaid, CHIP, etc.) to pay those prices, even if it means paying a substantial amount from their own resources.

Fourth, one way to empower patients in a real medical marketplace is to encourage completely flexible Health Savings Accounts that can wrap around any third-party health insurance plan.

Finally, we need not worry that rationing by price will result in unreasonable denial of care. The current system of rationing by waiting is never going to go completely away. It will always be there as a backstop.

RELATED
Who’s to Blame for the High Cost of Living?
How the Boom Bust Works
If You Really Wanted to Destroy the United States, Then . . .
The GOP Needs to Go Back to Sound Principles on Free Enterprise, Small Government, and Legal Immigration
Fine. Blame Ticketmaster for the Taylor Swift Fiasco, but Don’t Overlook the Fundamental Cause.
Can’t Get Taylor Swift Tickets? Blame Other Fans, Not Ticketmaster
Let Them Compete: Labor Markets Are Workers’ Friends, Not Their Enemies
There Are 8 Billion People. We Should Celebrate Superabundance, Not Lament ‘Overpopulation’
What Difference Did the Election Make?
Why Do Progressives Support Democrats? Part One
Enjoyment of the Upcoming World Cup Will Come at a Price
Diabetic Complications and Economic Fundamentals