The California State Department of Education has released a new draft of its curriculum framework for K-12 mathematics. While it is notably improved regarding opportunities for advanced work, the document is still woefully laden with dogma about politics and about how to teach math.

The framework promotes only the progressive-education approach to teaching math, calling it “student-led” instruction, “active learning,” “active inquiry,” and “collaborative” instruction. But evidence from the 1950s through recent times shows that this way of teaching math is ineffective. That evidence comes from scrutinizing carefully designed studies featuring randomized control and what are called quasi-experiments, which come close to the effect of randomized assignment. Quasi-experiments look at cases, for example, where two adjoining districts with similar populations or two adjoining similar schools adopt different policies. Both sorts of studies are much stronger evidence than the case studies that progressive educators rely on.

In the spring 2012 issue of American Educator, the magazine of the American Federation of Teachers, top educational psychologists Richard E. Clark, Paul A. Kirschner, and John Sweller summarized “decades of research” that “clearly demonstrates” that for almost all students, “direct, explicit instruction” is “more effective” than progressive education in math.

Clark, Kirschner, and Sweller conclude that after “a half century” of progressive educators advocating inquiry-based teaching of math, “no body of sound research” can be found that supports using that approach with “anyone other than the most expert students.” Evidence from the best studies, they emphasize, “almost uniformly” supports “full and explicit” instruction rather than an inquiry-based approach. Yet when explicit, direct instruction is discussed in the proposed math curriculum (chaps. 3 and 6), it is deprecated.

Moreover, in 2016 the Organization for Economic Cooperation and Development (OECD) reported on its 2012 round of tests, the Programme for International Student Assessment (PISA). The data clearly showed that “teacher-directed” instruction was more effective than “student-oriented” instruction. (See chart.) 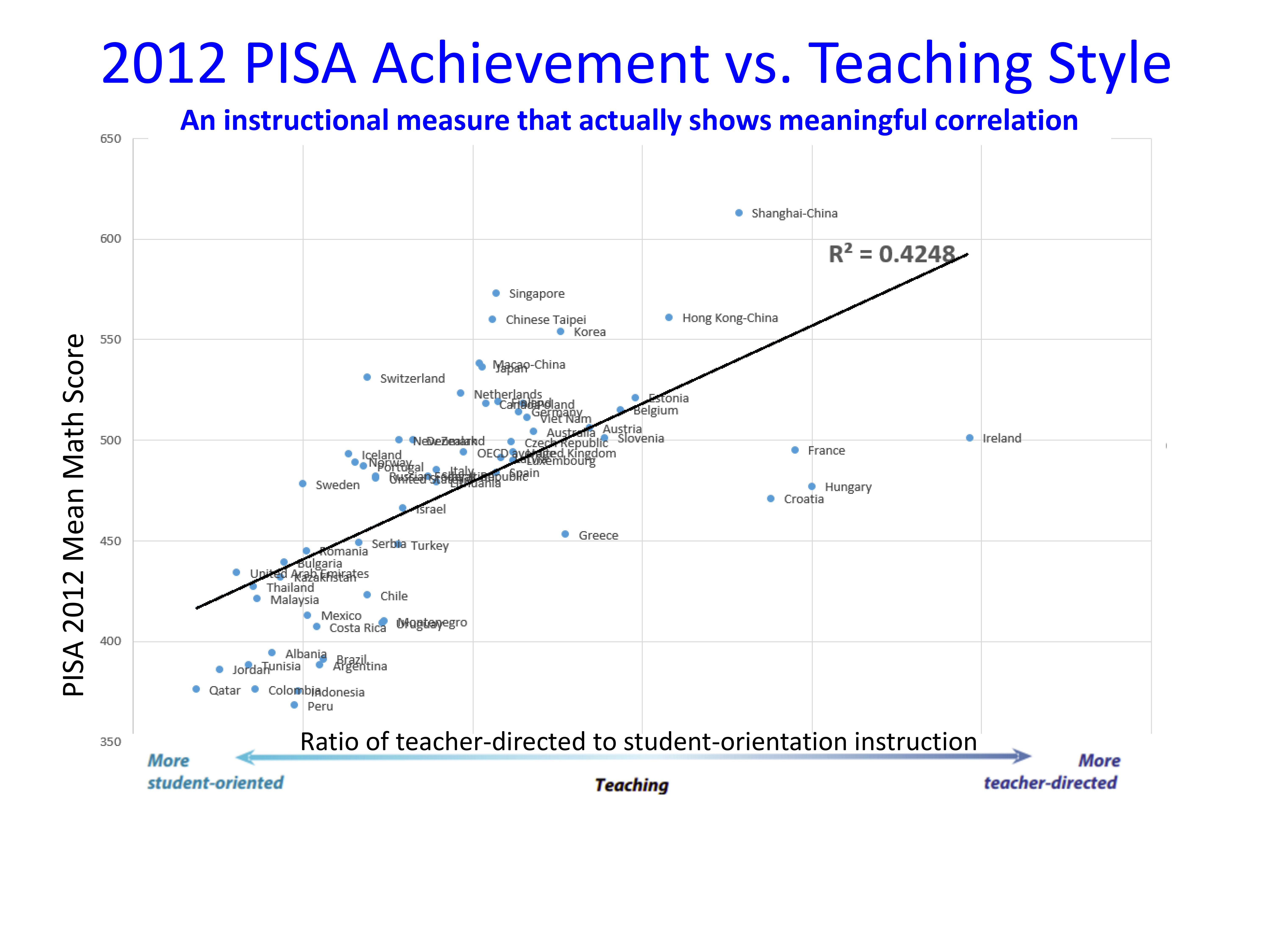 Yet the proposed math framework promotes only progressive education’s inquiry-based approach. This is ideology, not science. It will not help those who struggle in math. It can only bring down student achievement.

If the framework writers had wanted solid evidence, they would have relied on the final report and subgroup reports of the 2008 federal National Mathematics Advisory Panel. They would have made even more use of the practice guides of the federal Institute of Education Sciences, which are designed for teachers and curriculum writers. Instead, the framework’s writers pretend this high-quality evidence doesn’t even exist.

In terms of putting students of similar preparedness together the new draft improves over its predecessor. The previous draft would have outlawed any classes that were grouped according to math achievement in K–10. The current draft still speaks of the “negative aspects” of tracking systems in middle school (chap. 9) and disparages “blunt methods” of tracking (chap. 9). But on the whole it has a salutary emphasis on accessible options and opportunities for students to “catch up with content as well as accelerate” their learning.

The previous draft was also notable for its heavily politicized content. Over 1200 figures in California’s community of scientific and math professionals (most of whom are college and university professors) denounced this importing of political content into math instruction. In some ways the new draft is an improvement. It has removed claims that math is not a neutral, objective discipline, and some highly political vignettes have been toned down.

Nonetheless, “trauma-induced pedagogy” is still highlighted (chap. 2). This is the idea that students are disabled emotionally by a racist, sexist, violent society ruled by a capitalist class and that therefore teaching should be therapeutic. Such teacher-therapists often conclude that their teaching should encourage resistance to society’s institutions. This is an ideological distraction.

So the proposed math curriculum is still highly politicized. A teacher is considered exemplary for promoting “sociopolitical consciousness” (chap. 2). Teachers are told that they should take a “justice-oriented perspective” at any grade level, K–12, in order to empower their students politically (chap. 2). For example, teachers are told to have students do practice exercises and data analysis in the context of “environmental or social justice” (chaps. 1 and 7).

Math should be neutral and nonpolitical. A math that caters to the 12 percent of Californians who are “strongly liberal” is a math that will upset the millions of parents who are not that liberal. Why should they pay their tax dollars to have their children indoctrinated?

RELATED
The Cost of San Francisco’s Reparations Proposal: Nearly $600,000 Per Household
What the Populists in Congress Get Right and Get Wrong
Debt Ceiling Kabuki: Republicans Will Cave and U.S. Government Finances Will Get Even Worse
Texas Conservatives Should Not Support Banning Land Sales to Foreigners
Reckless Reparations Reckoning
San Francisco Falls Into The Abyss
It’s Time to Put a Brake on the Debt-Ceiling Charade
The Garage Papers: From Alger Hiss to Sandy Berger, Hillary Clinton and Joe Biden, it’s all about memory against forgetting.
South Carolina Lawmakers Bear Responsibility for Supreme Court’s Abortion Ruling
‘Belief in Freedom’ Is Bad for You
Does the U.S. Need to Contain China in Africa?
Feds Are Profiting Off of Policy: Only Voters Can Stop Them