Why More U.S. Inflation Is Right Around the Corner: News: The Independent Institute

On Tuesday, the Bureau of Labor Statistics released the Consumer Price Index (CPI) for the month of March. Prices increased by 0.6 percent since February, the largest monthly increase since August 2012. On a year-over-year basis, the CPI increase was 2.6 percent. Given that the CPI for March 2020 was abnormally depressed because of the COVID-19 pandemic, most observers anticipated that the year-over-year increase would be elevated, but not as elevated as it actually turned out to be. I, for one, was not surprised.

The dramatic growth in the U.S. money supply, when broadly measured, that began in March 2020 will do what increases in the money supply always do. Money growth will lead in the first instance (1–9 months) to asset-price inflation. Then, a second stage will set in. Over a 6–18-month period after a monetary injection occurs, economic activity will pick up. Ultimately, the prices of goods and services will increase. That usually takes between 12 and 24 months after the original monetary injection. Given this sequence, it’s as clear as the nose on your face that we’re going to see more—perhaps much more—inflation entering the system in the coming months.

To get a handle on how the economy works and where we’re going, one needs a model of national income determination. For me, a monetary approach to national income determination is what counts. Indeed, in a fundamental sense, it’s a theory of everything. The close relationship between the growth rate of the money supply and nominal GDP is unambiguous and overwhelming.

Let’s use QTM to make some benchmark calculations in order to determine what the “golden growth” rate is for the money supply. This figure will be the rate of broad money growth that would allow the Fed to hit its inflation target. I have calculated the golden growth rate for the 2010–2020 period.

According to my calculations, the average percentage real GDP growth from 2010 to 2020 was 1.8 percent, the average growth in total money supply (M4) was 6.5 percent, and the average change in the velocity of money was -2.5 percent. Using these values and the Fed’s inflation target of 2 percent, I calculated the U.S. golden growth rate for total money (M4) to be 6.3 percent.

How do I get there? The golden growth rate is the inflation target plus average real GDP growth minus the average percentage change in velocity (U.S. golden growth rate = 2.0 percent + 1.8 percent – (-2.5 percent percent ) = 6.3 percent).

So, the average growth rate of the money supply (M4), which has been 6.5 percent, has slightly overrun the golden growth rate of 6.3 percent (see my calculations, and the chart below). This has resulted in a realized inflation rate of 1.7 percent per year, slightly below the target of 2 percent. That the realized inflation rate is, however, a bit below the Fed’s target is not surprising when you realize that prior to the explosion in the money supply in 2020, the average rate of growth of broad money was very modest from 2010 to 2019. It averaged only 4.0 percent, rather than the 2010–2020 average of 6.5 percent. 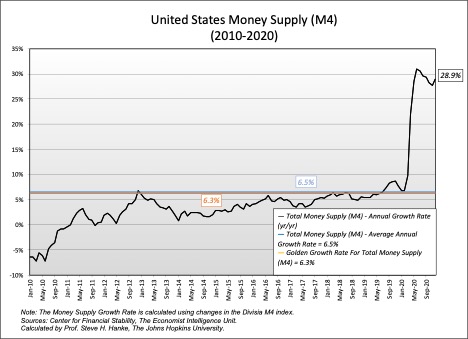 Armed with the monetarist model for national income determination and the numbers just presented, it should be obvious, even to the untrained eye, that the recent March year-over-year CPI inflation rate of 2.6 percent is simply a harbinger of what is coming in the future: more inflation.

RELATED
The Federal Reserve Needs to Remove Its Blinkers
Liberal Myths
Why The Left Always Projects
The Specter of Chinese Civilization
Diversity, Equity, and Inclusion in the Economics Classroom
That’s Not Real Socialism!
Trickle-Down Bidenism: This Biden socialist cadre who engineered these self-induced calamities has no clue about the damage they have done to America.
Biden’s Borderline Madness
Trump Nearing the Crossroads
Den of Thieves
Karl Marx’s Choice for Treasury Department Comptroller
The Battle Over Biden’s Currency Comptroller