←  ABOUT US
About
›
Person Detail
Alan W. Jones, OBE 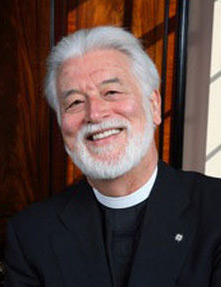 The Very Reverend Dr. Alan W. Jones, OBE, is Dean Emeritus at Grace Cathedral of San Francisco, California, and Honorary Canon of the Cathedral of Our Lady of Chartres. He was received into the Most Excellent Order of the British Empire in 2002.

Previously, he served as the Stephen F. Bayne Professor of Ascetical Theology at the General Theological Seminary in New York City from 1972-1985. During his tenure, he was the Founder and first Director of the Center of Christian Spirituality at General. He has also served on the staff of Trinity Institute of Wall Street's Trinity Church.

Now a U.S. citizen, he was born in England and received his Ph.D. from the University of Nottingham. He is a prominent lecturer in Episcopalian and academic circles both nationally and internationally. Dr. Jones has received an honorary doctorate from the University of San Francisco, is a member of the Board of Directors of The American Conservatory Theatre, and was the Founder and Moderator of "The Forum at Grace Cathedral," a series of televised conversations on the role of faith and ethics in contemporary life.

Dr. Jones is a prolific writer of books, articles, and editorial opinions, and his many books include Journey Into Christ, Living in the Spirit, Exploring Spiritual Direction: An Essay in Christian Friendship, Soul-Making: The Desert Way of Spirituality, Passion for Pilgrimage, Sacrifice & Delight, The Soul’s Journey: Exploring the Three Passages of the Spiritual Life with Dante as a Guide, Living the Truth, Seasons of Grace, Reimagining Christianity: Reconnect your Spirit Without Disconnecting Your Mind, and Common Prayer on Common Ground.